TO BE CONSIDERED FOR TOP TEAMS, PLAYERS SHOULD TRYOUT AS EARLY AS POSSIBLE.
​* Tryouts for both Waco and Belton Regions are held at LSC.  Belton Region practices will be held locally in that area once practices begin.

As in conjunction with the USAV code of conduct, for national teams, we will require both athlete and parents to be emotionally mature. Being emotionally mature can be described as when someone can manage their emotions no matter their circumstances, holding themselves in a proper and responsible manner. We expect our athletes to be pushed mentally and physically in order to grow into the best versions of themselves. Furthermore, our national teams schedule is some of the most competitive in the Lone Star Region. We expect our athletes and parents to be able to commit and partake in the schedules they sign up for, including being mentally and physically prepared for a demanding schedule.
register now!
You will be directed to login to your Sports Engine account or to create an account if you don't have one.
Look at commitment levels below.  You will be asked to select a level.

What age group should I tryout for?
Age Classification for the 2022-2023 Season​​ 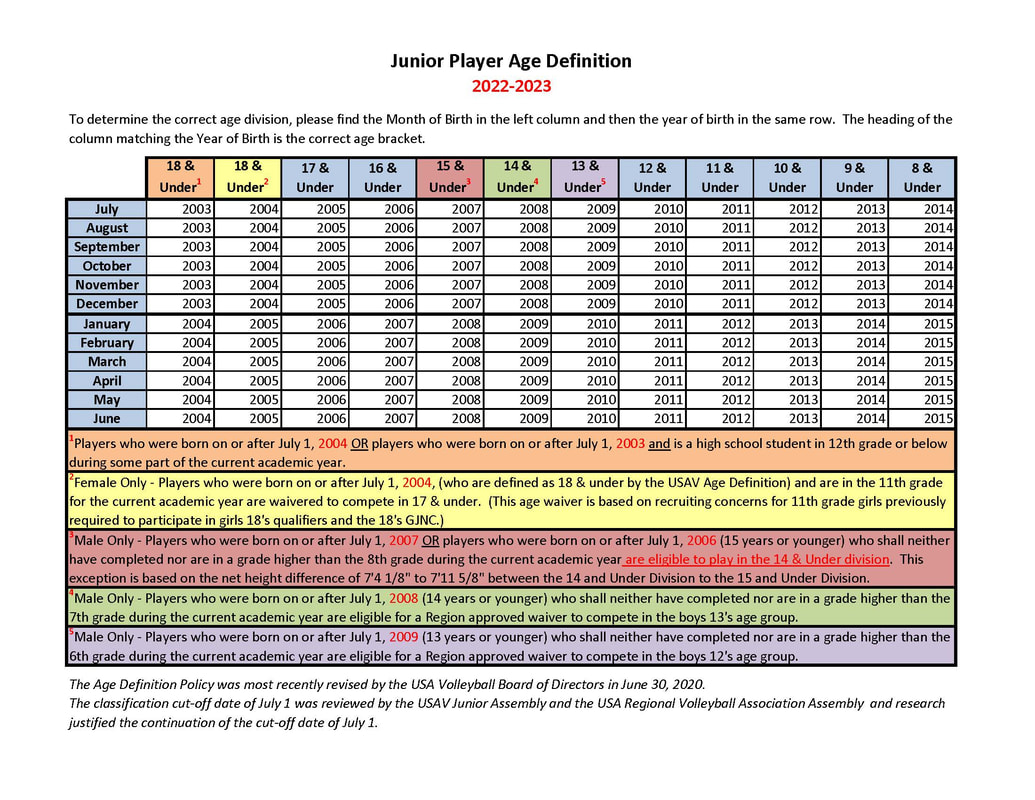 What if I cannot attend the tryout?​
If you are unable to attend tryout day, you can still be considered for a team. You must e-mail Jerry Sorrells prior to tryouts to discuss the options to make up the days.
How many players are placed on a team?
We typically place 9-12 players on a team. Factors that affect this determination include but are not limited to: age group, the level of talent, and the positional needs of a particular team.
When will I know if I made a team and which one that is?
Soon after the conclusion of tryouts for your age group, you will receive an email from TLVC with team information and an invitation to accept your spot. You must accept your spot and pay the deposit before the time mentioned in the email or your spot may be given to the next athlete. The amount of time it takes to receive your email may vary based on many factors. We will do our best to send the email in a timely fashion.
What happens if I make a team?
Once you are placed on a team, you will receive an email with an invitation to accept your spot. You must complete this registration and pay the non-refundable first payment.  The remaining balance is spread out in monthly payments. Once you've accepted a spot on a team, the remaining balance of the dues is non-refundable.
Do I have to wait until I am at least 12 years old to tryout?
No, we offer age groups from 11 & under to 18 & under, but athletes can start as young as 9 years old.
What should I bring to tryouts?
Athletes should bring a refillable water bottle and wear appropriate volleyball attire.
ARE PARENTS ALLOWED TO WATCH TRYOUTS?
Parents are welcome to help their athlete check in. We ask that only athletes be inside the building during the tryout process.  We understand that this is a stressful time for players and families. We will always try our best to help make this experience enjoyable and educational.
WHAT ARE THE FEES FOR THE 2022-23 SEASON?
The fees cover the cost of gym rental, equipment, tournament entry fees, uniforms, coaches salaries, and administrative fees. All TLVC players will have access to a full-time college recruiting director.  Fees do not include: USAV registration, airfare, hotels, food, any ground transportation to and from practice sessions and out-of-town tournaments, shopping, etc. ARE THERE MANDATORY FUNDRAISERS OR APPAREL PURCHASE REQUIREMENTS?
No.  We do not require fundraising from any team at any commitment level, nor do we require apparel purchases outside of what is issued with the uniform package which is included in the fee.